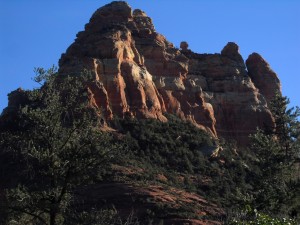 The Annual Sedona Bluegrass Festival kicks off Wednesday, May 4th in Sedona, Arizona. Enjoy five days of Bluegrass in the Red Rocks! “Full of good vibes, great people, amazing food, blessed visuals, and pretty fine pickin. What could be better?” (Mike Marshall).  El Portal invites to make it your home away from home during the festivities.

The festival kicks off Wednesday May 4th with a performance by the Claire Lynch Band at the Library; admission is $5/person plus two cans of food (reservations are highly recommended). last week you may have read the blog about Claire Lynch, here is some information about the boys in the band – Mark Schatz (Bass, Clawhammer Banjo, Percussive Dance), Jason Thomas (Mandolin, Fiddle & Vocals), and Matthew Wingate (Guitar, Mandolin & Vocals).

Jason Thomas’s musical roots first took hold at age eight, when he began playing with his family band in southern Ontario.   It was then that his dad taught him to play bluegrass mandolin. In high school he started his own band, began to do studio work, and played around the southern Ontario bluegrass scene.  Since his studies in violin and Music Education at Evangel College in Springfield, MO, Jason has been a full-time professional musician, having toured extensively across the U.S. and overseas.  Jason is in high demand around his residence in Orlando, Florida as a side musician in almost every musical genre. He has toured and recorded three projects with the Montana-based band Kane’s River, which charted two singles on Bluegrass Unlimited’s National Bluegrass Survey, recorded with IBMA nominee Mark Johnson along with Tony Rice and the Rice Brothers, and with Ben Winship and David Thompson on the highly-proclaimed “Fishing Music” projects. In April of 2006, after having been a long-time Front Porch String Band fan, Jason joined the Claire Lynch Band.  He appeared on four freshly-recorded tracks from Claire’s anthology cd, “Crowd Favorites” in 2007 and is a primary player on Claire’s newest release “Whatcha Gonna Do” contributing on mandolin, fiddles and harmony vocals.

The newest member of the band may also be the youngest, but Matt Wingate brings impressive credentials and a mature, improvisational musicality seemingly far beyond his years, making him a natural for The Claire Lynch Band. Winning Merlefest’s Doc Watson Guitar Championship in 1997 at the age of 15, at a time when he was performing with his family band, Matt later honed his bluegrass chops performing across the U.S. and in Europe as Valerie Smith’s lead guitar player. He began performing with the Greencards in 2004, an experience that immersed Matt in a musically broader, more progressive repertoire, deepening his musical vocabulary and his facility with complex arrangements. From 2006-08, his work as a member with a hot young band, The Lovell Sisters, opened the door for Matt to play a more significant creative role, lending a strong hand to the selection and arrangement of material. In 2008 Matt released a solo CD, A Good Dream, to excellent reviews. Flatpicking Guitar Magazine featured Matt on the cover of its March/April 2009 issue, praising not only his flatpicking prowess, but also his “top notch” level of musicianship and his considerable talents as a singer, songwriter, and multi-instrumentalist (including guitar, mandolin, bouzouki, bass, drums and dobro). ” ( from Sedona Chamber Music)

El Portal Sedona Hotel is nestled in the heart of Sedona, close to all the festivities! We have 12 unique suites, some with pet patios and yards (El Portal is a very pet friendly bed and breakfast), all with a private entrance, patio, fireplace, whirlpool bath, entertainment center and DVD, wifi, telephone, and more. Experience the dramatic views, relax in our romantic courtyard, take in the Festival from our luxury inn! For reservations call 1-800-313-0017, or visit www.ElPortalSedona.com.